In this, my first newsletter to you, I want to pay tribute to the sterling work done by Errol van Staden and Tobie Louw, who stepped down as Directors of HPP at our recent AGM.

Errol and Tobie were instrumental in the redesign and relaunch of HPP as the management body of the Hermanus SRA in July 2020. After the relaunch they continued their good work in their respective roles as Chairman and Director Strategy and Finance. They held these roles for three years with distinction. In line with the HPP’s Memorandum of Incorporation (MOI) they decided to step down after serving a term of three years. (They were registered as directors in September 2019.)

As a newcomer to the HPP Board, I am impressed by the thorough foundation which has been laid for HPP to do its work. The MOI, various policy documents, annual implementation plans and budgets provide good examples of the work done by the HPP Board. The transparency of HPP’s policies and operations, as exhibited by its website, monthly newsletters and reports makes it very different to many non-profit companies or NPC’s. We are indebted to the previous HPP Board for its good work.

A sound test of HPP’s work is provided by the annual satisfaction survey. The survey is conducted to determine the general opinion of the Hermanus SRA ratepayers about the services provided by HPP. The outcome of the survey has been used to refocus HPP’s plans and actions. (Please click here to see the results of the most recent survey, as reported in our June Newsletter.) The high level of support for and appreciation of HPP’s work, as expressed by HPP members, is a tribute to the work done by the HPP Board, under Errol’s Chairmanship.

An amazing feature of the work done by HPP Board Members, is that they have done so on a voluntary basis without earning a single cent.

We owe Errol and Tobie a huge word of thanks for their service to the HSRA community!

The “new” Board consisting of Ann Wright, Leon Rauch and myself, as well as the HPP Executive Officer Marcia Bown, are thankful that both Errol and Tobie have promised not to disappear and to continue providing assistance, as needed.

My personal priority is to invite some new members to join the Board. I hope to do so in line with the outcomes of a Strategy Session which will be held in the coming weeks. Members of the Hermanus Business Community, the various suburbs within the HSRA, the neighbouring Onrus/Vermont and Kleinmond Special Rating Areas (SRA’s) and the Overstrand Municipality Council, have been invited to the meeting. I will share the outcomes following this meeting with you.

The 2022 Annual General Meeting of HPP NPC was held, under Errol van Staden’s Chairmanship, on 13 September via Zoom. The number of members who attended was 23 and the 22 proxies were received. The meeting was quorate. The Implementation Plan and the Budget for 2023/2024 were approved, together with Auditor’s remuneration and appointment for the years 2023/2024.  The Minutes of the meeting can be found here.

My thanks to the members who attended and contributed to the lively discussion.

Meetings with the Overstrand Municipality (OM)

Several significant meetings were held with the Overstrand Municipality during September:

On 1 September 2022 HPP presented an Operations Update to the Overstrand Municipality Director of Protection Services Neville Michaels and his team. An overview of HPP’s Public Safety Services was presented and discussed at the meeting. Director Michaels emphasised the need for the OM and HPP to work in a complementary fashion and he expressed his appreciation for the contribution made by HPP in this regard.

On 8 September, the monthly Overstrand Joint Public Safety Forum (OJPSF) was held. This meeting is chaired by Deputy Executive Mayor and Chairperson of Protection Services Lindile Ntsabo. Key role players from SAPS, Municipality Protection Services, SRA’s, CPF’s, Neighbourhood Watches, Cape Nature and other stakeholders were in attendance. The aim is to identify hot spot areas and to combine resources to combat crime. HPP recognises that the HSRA is a small part of a wider area and collaboration and cooperation is vital in the prevention of crime and we appreciate the broader perspective these meetings offer.

The recently installed signage along the Cliff Path reminding dog owners of their legal and social responsibility have been well received and we are hopeful they will prove to have a positive impact.

There are ongoing discussions with the Overstrand Municipality to improve the indigenous gardens and hard landscaping along the section between the Marine Hotel and Amphitheatre. We look forward to these enhancements. 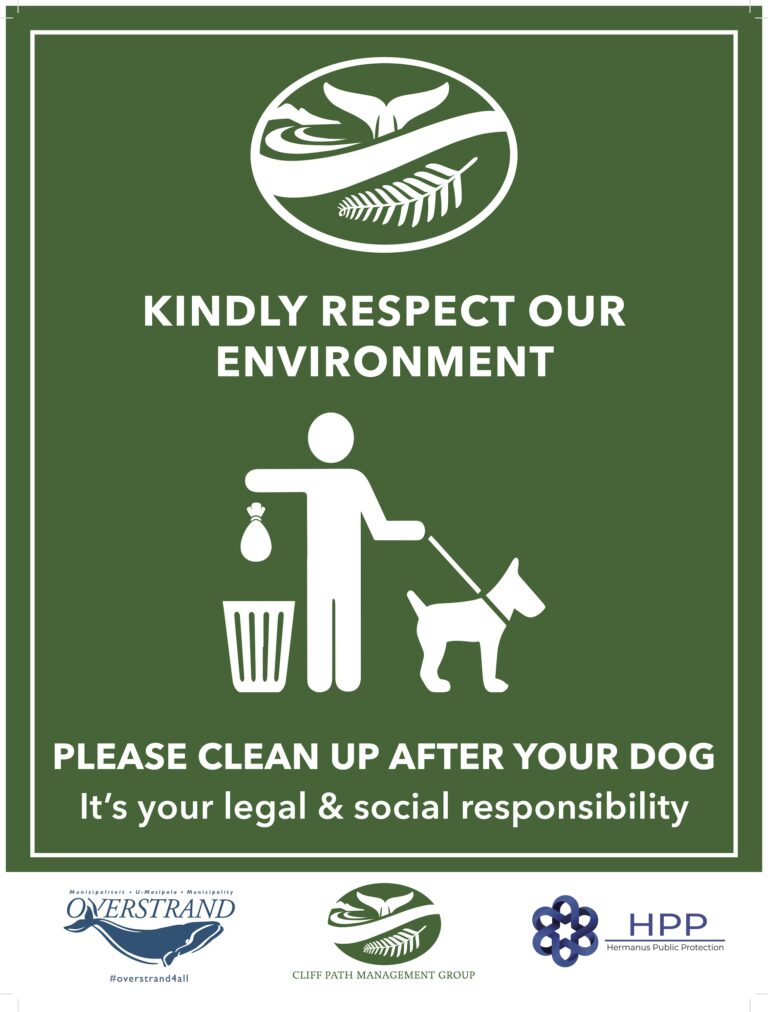 The OM Council approved the above policy on 29 August. It can be found here.

This policy has placed the relevant stakeholders into new territory which (quoting Errol van Staden) requires “cool heads, rational debate and an understanding that the CCTV- landscape is changing.”

The policy compels HPP to follow due process. The Board has therefore put in place the necessary protocols to comply with relevant and emerging legislation, specifically as it pertains to control centre management and CCTV.

Recent incidents have highlighted the need for HPP to explain the following practical steps which HPP and ratepayers are able to take in certain instances:

SHOULD YOU BE A VICTIM OF CRIME

SHOULD YOU WISH TO REPORT A BY-LAW TRANSGRESSION

The recent increase in criminal incidents is of high concern to HPP. We have of course been asked how we can best address the situation. In the last few days I have for instance been asked what HPP could do to ensure the safety of visitors to the Fernkloof Nature Reserve – you may be aware that last Friday, two ladies were robbed on the path near the waterfall. Although the Nature Reserve is not part of our SRA, I can assure you that we have offered our help to the Overstrand Municipality. We are keen to participate in initiatives to urgently address this situation.

I look forward to updating you at the end of October on HPP developments and thank you for your interest and support.

As always, we urge you to be vigilant and aware.