I apologise for this somewhat late newsletter. We usually try to get the monthly newsletter to you towards month end, but this time we are running late.

Judging by the number of visitors, Hermanus experienced a bumper Easter weekend. And the weather was kind. Saturday was one of those champagne days. Our beaches were packed. I am hoping that all our visitors and remote property owners made their way home safely.

In as much as we would like to create a crime-free area, it remains an elusive target. Fact of the matter is there are many socio-economic and political factors that fuel crime.

We must also accept the fact that Hermanus has unfortunately lost some of its carefree character. It is no longer safe to leave doors unlocked when you go to the beach, or to leave expensive toys lying around when you retire for the evening. You are being watched.

It is probably also idealistic to expect law enforcement agencies (including HPP and private security companies) to provide complete protection against crime on a 24|7 basis. It is simply not possible.

Whilst Voelklip continues to bear the brunt of burglaries within the HSRA, FADT has reported a decline of almost 50% in reported burglaries amongst FADT-clients in Voelklip during the month of March. This can in part be attributed to the heightened presence of HPP, private security companies, Law Enforcement, neighbourhood watch groups and SAPS in the suburb. Statistics for the other suburbs within the HSRA are low.

There were reports of at least three incidents at Grotto Beach during the past 6 weeks. As a result, HPP and LE have stepped up patrols in this area. They also conduct regular ‘sweeps’ of Piet-Se-Bos, the Mossel River area and hide-aways along the shoreline. Vagrancy remains an ongoing challenge in the CBD and along the cliff path.

Although we have incidents, fortunately, these remain relatively low in number. However, we should not be lulled into complacency. Please remain alert and phone the HPP control room (087 550 5295) whenever you observe suspicious behaviour.

Whilst we were hoping to share this strategy with you by end of March, we shall now only be able to share details during April 2021.

Given its strategic nature and multiple time horizons, it is taking slightly longer to design the framework.

The Department of Environment, Forestry and Fisheries (DEFF) is responsible for dealing with South Africa’s illicit abalone trade.

HPP reports incidents of poaching on a regular basis to DEFF’s local office, which is headed by Mr Mzwandile Grootboom. Sometimes we get a response, sometimes we don’t. HPP has tried to convene a meeting with Mr Grootboom and the local office of Cape Nature to discuss the matter, but thus far it has been impossible to get the three parties around a table. The lack of effective action remains a frustration.

The Cliff Path, a top attraction for visitors and locals in Hermanus, also forms part of Fernkloof Nature Reserve, which subjects the path to the by-laws of the Overstand Municipality. The main points of the by-laws include:

In recent months, there has been a notable increase in dog faeces along the Cliff Path. As well as being an unhygienic nuisance to users of the Cliff Path, dog faeces is harmful to the environment, as it contains pathogens and insecticides that are hazardous to the biodiversity along the path.

We appeal to users of the Cliff Path to adhere to the by-laws and work together to ensure that the Cliff Path remains a top attraction and a joyful experience for everyone who uses it.

New signage will be placed along the Cliff Path to remind dog owners of their responsibilities and Law Enforcement officers will be enforcing the by-laws. The HPP patrollers will now carry dog poop bags for owners who may have been caught short!

In terms of the new POPI Act, which came into effect on 1 July 2020, we may not simply add your mobile number to a WhatsApp group without your permission.

If you are currently NOT receiving WhatsApp messages from HPP, but are keen to receive them, please do ONE of the following:

Your message must contain the following information:

You may register more than one number per ERF and opt out at any stage. You also have the choice of muting messages if you do not wish to be disturbed. However, if you want to be informed of what is happening within the HSRA and with HPP, it might be wise to subscribe to this messaging service.

As stated before, we shall not disclose your details to a third party other than the Overstrand Municipality. 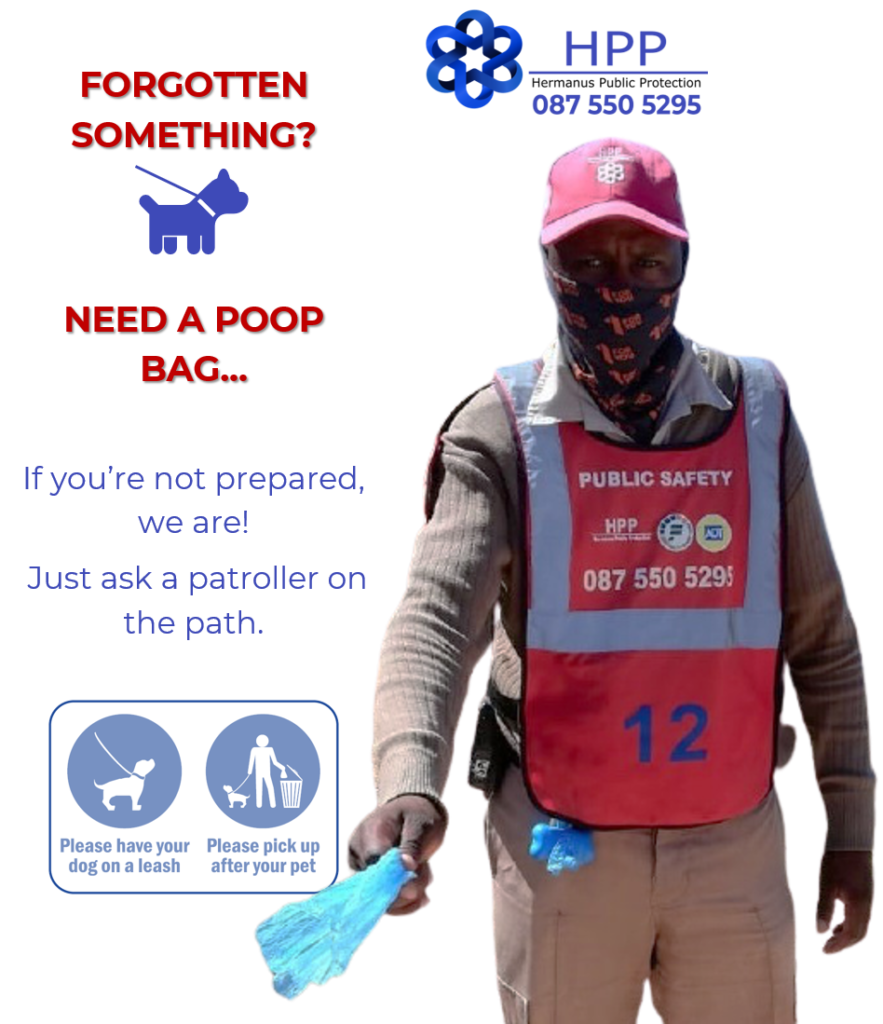